The Philadelphia Flyers have dipped their toes into the college free agent market, signing Jackson Cates to a two-year entry-level contract. The deal will begin right away, meaning Cates will become a restricted free agent after the 2021-22 season. It carries an average annual value of $925K, the highest number the entry-level system allows. Flyers AGM Brent Flahr released a statement on his new player:

Jackson is a player that our staff has followed closely throughout his college career. He’s a tenacious two-way center that has steadily improved his overall game each season. He’s been an integral part of a very successful college program at UMD and we’re excited to see him take his game to the next level.

Cates, 23, was undrafted out of the USHL and has spent the last three seasons playing for the University of Minnesota-Duluth. In 2020-21, he recorded 27 points in 28 games, trailing only Minnesota Wild prospect Nick Swaney in team scoring.

If you’re a Flyers fan wondering where you’ve heard the name Cates before, he is the older of the team’s 2017 fifth-round pick Noah Cates, who captained UMD this season alongside his brother and is still unsigned. Noah, 22, has also been at the school for three years, but it is not clear if he will also be starting his professional career by signing an ELC.

For Jackson, it’s been a long affiliation with the Flyers after participating in the team’s 2019 development camp. He’ll now enter the organization and technically could play for the NHL squad this season after completing any required quarantine procedures.

Montreal Canadiens GM Marc Bergevin spoke with the media today following the passing of the trade deadline and did not parse words when asked about injured star Brendan Gallagher. Bergevin does not believe that Gallagher has a chance to play prior to the conclusion of the regular season, he openly admitted. This would align with the six-week timeframe that Gallagher received after fracturing his thumb this past week. There was some optimism that Gallagher could return before the Canadiens’ season is currently scheduled to end on May 11, but Bergevin either does not see this as realistic or simply will not rush Gallagher back to play regular season games. With the North Division playoff teams all but set, Montreal faces little risk of missing the postseason so the priority with Gallagher is only to get him as healthy as possible for the playoffs.

The NHL Trade Deadline has come and gone. A relatively slow day ended with a late burst, as many teams jumped into the mix at the last minute. How do you think your team did? Share your deadline grades in the comments for teams in the East Division.

The Washington Capitals have acquired Michael Raffl from the Philadelphia Flyers. The Flyers will receive a fifth-round pick (VGK) in return and will retain 25% of his remaining cap hit.

It’s not quite the Anthony Mantha trade, but the Capitals still add some physical forward depth by bringing in Raffl, who has played all 504 of his career games with the Flyers. A one-time 20+ goal scorer, the 32-year-old forward has just eight points this season in 34 games this season.

He won’t be playing big minutes in Washington, but Raffl does replace the depth that went out the door when Richard Panik was cleared off the books. The difference is that even before the salary retention, Raffl carries just a $1.6MM cap hit through the end of this season and is then an unrestricted free agent, not affecting the Capitals salary structure down the road.

For the Flyers, adding a fifth for a player that wasn’t making much of an impact is a win, even if the playoffs aren’t necessarily off the table at this point.

The Montreal Canadiens lost Victor Mete on waivers today, but they’re bringing in some more defensive depth. Elliotte Friedman of Sportsnet reports that the Canadiens have acquired Erik Gustafsson from the Philadelphia Flyers. Pierre LeBrun of The Athletic reports that the Canadiens will send a 2022 seventh-round pick, while the Flyers are retaining 50% of Gustafsson’s remaining cap hit.

It might seem amazing that a defenseman who scored 17 goals and 60 points in the 2018-19 season could be grabbed for a seventh-round pick, but that’s just how poorly Gustafsson’s defense is regarded around the league. There’s no doubt he can be an offensive catalyst, but he has played his way out of the lineup for three different teams now with his inconsistent ability in his own end.

Luckily, the Canadiens won’t be asking Gustafsson to be playing heavy minutes given how the depth chart looks right now. Instead, he’ll come in along with the recently acquired Jon Merrill to give the bottom-pair rotation a different look or fill in for any injuries.

One name that has been thrown around in recent weeks is Scott Laughton, a physical forward for the Philadelphia Flyers who was getting closer to free agency. As it turns out, free agency will have to wait. Laughton has signed a five-year extension with the Flyers which will carry an average annual value of $3MM.

Laughton, 26, hasn’t ever been a huge offensive producer, but there’s a lot of other positives in his game. Able to capably play the center position and line up against the other team’s best, he brings size, speed and physicality to the ice every night. In 38 games this season he has seven goals and 17 points, while recording 99 hits and averaging more than 15 minutes a night.

There was some speculation that Laughton might even bring a first-round pick back to Philadelphia if he were traded today, as the interest was high from around the league. Whether a pick that high was ever actually offered isn’t at all clear, but it won’t matter anyway as Laughton is staying in Philadelphia for another huge chunk of his career.

At just $3MM, he can fit into the bottom-six without impacting the salary cap negatively for Philadelphia and continue to anchor the team’s penalty kill. Getting fie years is a huge win for Laughton, who will now be under contract through his age-31 season.

We are now less than two weeks away from the NHL Trade Deadline and talks are heating up. Where does each team stand and what moves should they be looking to make?  We continue our look around the league with the Philadelphia Flyers.

After the first ten games of the season, the Flyers were 7-2-1. Another ten made it 12-5-3. This seemed like the year they would really compete for an East Division crown and step into the limelight as a Stanley Cup contender. But over the last month, things have continued to trend downwards and after being the team to finally break the Buffalo Sabres losing streak, the Flyers deadline position isn’t at all clear. 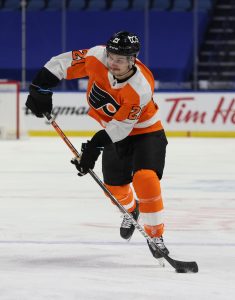 The first name that will be brought up is Shayne Gostisbehere, the recently-waived defenseman that still excites the imagination of hockey fans everywhere other than Philadelphia. The 2016 Calder Trophy runner-up set a career-high with 65 points in 2017-18 but has seen his effectiveness and role plummet ever since. There are still flashes of absolute brilliance from the 27-year-old defenseman but his contract, which carries a $4.5MM cap hit through the 2022-23 season makes it hard to live with his turnovers and poor defensive decisions. That contract also got him through waivers, but perhaps if the Flyers retained some salary he could still be a valuable trade piece.

Still, it seems more likely that teams would be after different players on the Flyers roster, including rental forward Scott Laughton. The 26-year-old Laughton is an unrestricted free agent at the end of the season, has just a $2.3MM cap hit, and is starting to generate some interest among the deadline speculators.

If the struggles continue for another week and they end up selling (a strategy that our Brian La Rose would already be taking), Erik Gustafsson is an easy flip to a contender that is looking for a little more depth on the back end.

1) Top-4 Defenseman: There’s no getting around it, when Matt Niskanen retired suddenly before the season began, Philadelphia’s plans were disrupted. The team has never really been able to fill his spot in the lineup and desperately needs a partner for Ivan Provorov. Those kinds of defensemen are not available very often, especially if they come with any term on their contract. That’s why the Flyers were immediately linked to Mattias Ekholm when his name started being thrown around, but with another Nashville Predators win today it’s hard to see them selling their talented defenseman.

Even if the Flyers believe in their team, a real fix in that top-four spot will be difficult to find at the deadline and may have to wait for the offseason.

2) Middle-six scorer: With Oskar Lindblom and Nolan Patrick both still trying to find their way after long absences, the Flyers haven’t been able to find that consistent goal-scoring from their third line. Adding a player that can put the puck in the net at even-strength and help on one of the powerplay units would certainly make them more dangerous. With prospects coming, a rental is probably the play here if the Flyers are buying at the deadline.

3) Veteran goalie: This is a bit of a tough spot given how much faith the team still has in Carter Hart to be a franchise starter, but no team is going to compete in the NHL with an .877 save percentage from their goaltenders. That’s the number Hart and Brian Elliott have combined for this season, meaning the team could certainly afford to bring in someone else to stabilize the crease down the stretch.

It has been a day where several NCAA players have signed their entry-level contracts.  The Flyers have joined in on the action, announcing the signing of defenseman Cam York to a three-year, entry-level deal.  Financial terms of the pact were not released but the contract will begin this season.  GM Chuck Fletcher released the following statement about the move;

We are pleased with Cam’s development and believe he is ready to take the next step with our organization. He was one of the top collegiate defensemen at the University of Michigan and was instrumental in helping lead the United States to the gold medal at this year’s World Junior Championships.

York was Philadelphia’s first-round pick (14th overall) back in 2019 out of the U.S. National Development Team where he averaged more than a point a game which is quite impressive for a blueliner.  While he wasn’t able to maintain that production in his two years at Michigan, he was still quite productive and notched 20 points (4-16-20) in just 24 games for the Wolverines this season which was enough to show Fletcher that he was ready to make the jump to the professional ranks.

As a result of the contract starting this season, York will be eligible to play for the Flyers down the stretch and into the playoffs if they’re able to get back into a top-four spot in the East Division.  More likely, however, is that he gets his feet wet with AHL Lehigh Valley.

It has been a busy few days for players picked in the middle of the first round in that 2019 draft.  All five selections from 12 through 16 played in college this season and have signed entry-level deals since Saturday.  Joining York out of that group are Cole Caufield (Montreal) who signed Saturday, Matt Boldy (Minnesota) who signed yesterday, as well as Spencer Knight (Florida) and Alex Newhook (Colorado) who all inked their first deals earlier today.